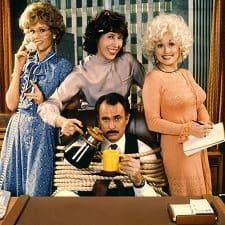 Welcome to our first movie discussion here on the blog — as noted a few weeks ago, I thought it might be fun for us to review a few movies about working women through the years that you may or may not have seen.  Today we’ll be discussing the 1980 movie 9 to 5.   Our next discussion will be of Working Girl, on November 1 — it’s available for streaming on Netflix, from your local library, and on Amazon. (Here’s a link to the trailer, and to the Rotten Tomatoes page, where it has an 84% fresh rating.)

(Warning if you haven’t seen it — spoilers ahead!)

Here’s what I remembered about this movie before watching it recently: I remembered that three women bonded together and tied up their mean boss and ran the company in his absence. I remembered Violet’s Snow White scene, with the birds and the poison in the coffee.  I kind of forgot about the “fun romp” with the dead body and the crazy role in the plot played by Doralee’s hand gun (which she brings to work!! loaded!!).

On rewatch: What a great, fun movie — and I love that when they reissued the widescreen DVD a few years ago they called it the “Sexist, Egotistical, Lying Hypocritical Bigot Edition.”  It was very interesting to me to see how Doralee’s character interacted with her boss, Mr. Hart — the routine way she defended herself against his advances, threats, and blackmailing was remarkable. Same old, same old.  (The recent New Republic article on 9 to 5 had this to say about the boss’s advances: “The concept of ‘sexual harassment’ as a legal issue—and not simply the way things were—wasn’t drilled into the American consciousness until eleven years after the release of 9 to 5, when Anita Hill testified at Clarence Thomas’s Supreme Court confirmation hearings. “) I really liked how all three of the women had a can-do attitude (even with the dead body!), even the meek divorcee, Judy. (I’m so happy she didn’t ditch her friends to go back to her cheating husband — that could very easily have been a plot point.) The flexible working conditions they introduced at the end were fantastic, and in the movie, at least, it was great to see the welcome reception the ideas had. (I feel like they may have glossed over some, er, liability/license issues with the on-site daycare, but hey, it’s fiction.) At the end of the movie, I was sad there was no Holloway & Harris moment for Violet, or that the three women didn’t start a business consulting other workplaces on flexible conditions — in some ways, the fact that their “happy endings” were so underwhelming is as much a mark of the times as anything.

All right, ladies, over to you — what were your thoughts on 9 to 5? What quotes and scenes had the most impact to you, so many years after it came out?

(Psst: we’ve talked about a bit about flexible work arrangements over at CorporetteMoms if you’re interested.) 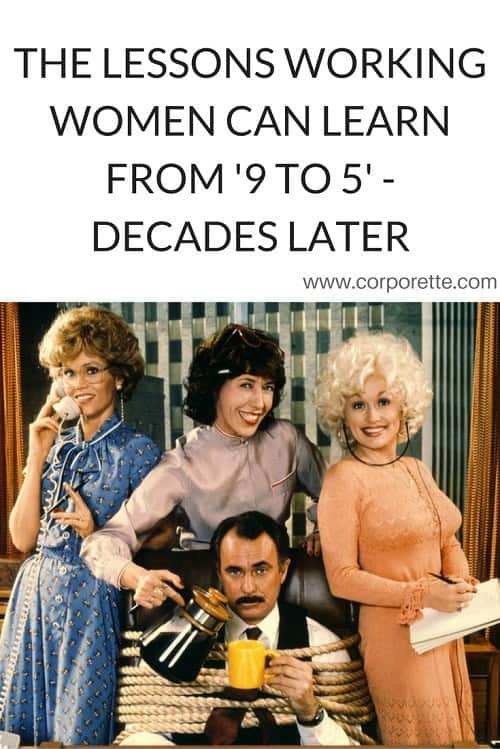