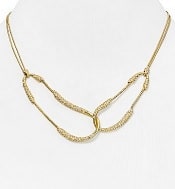 The Nordstrom Anniversary Sale may be over for the year, but Bloomingdale’s has a huge sale going on right now — save an extra 50%, for a total savings of 60-80% off. I’m a fan of all things Bittar, and this crystal-encrusted snake necklace is no different. I think it’s a great necklace that is delicate but still makes an impact — a new kind of statement necklace. It was $195, but is now marked to $109.69. Alexis Bittar Miss Havisham Crystal Encrusted Snake Chain Collar Necklace (L-2)

« The Corporette Guide to Stylish Cardigans for the Office
Tuesday’s TPS Report: ‘Playing Favorites’ Quince Belted Dress »
Back to Top