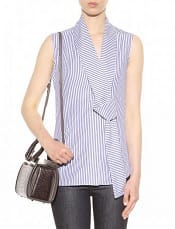 Our daily TPS reports suggest one piece of work-appropriate attire in a range of prices. If you’re into slightly avant-garde pieces made from preppy classics, this Victoria Beckham sleeveless blouse is for you. LOVE the interesting take on the self-tie at the neckline (sometimes called a “secretary blouse” or, sigh, a “pussy bow blouse”). I like the resulting off-kilter V-neck, the almost shawl-like effect, and the fact that you can dress it down with skinny jeans (as shown here) or up with a pair of slim ankle trousers and a blazer (or, ooh, one of the long cardigans that are everywhere this season). The blouse is $890 at MyTheresa. Victoria Beckham Sleeveless Cotton Shirt A few lower-priced options are here, here, and here (plus-size). Seen a great piece you’d like to recommend? Please e-mail [email protected] (L-5)