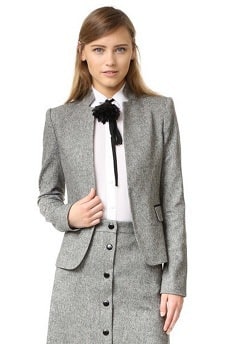 I’ve had this in my little reminder system for a possible Suit of the Week for … a while now… but I haven’t featured it because I couldn’t quite put my finger on what I liked and what I hated. I think the way it was styled here looks very ’80s secretary — but I think what’s worse is that the general shape of the skirt makes it so that it isn’t just the styling; I think any combo of that blazer and that skirt is going to end up looking kind of ’80s secretary. But what I loved and kept coming back to was the blazer — so I’m featuring it here, not as a suit. The black-and-white patterned wool, the leather trim, the elbow patches, the sharply notched collar — love it all. I think it would look great on top of a simple black sheath dress, perhaps with a pair of purple pumps. The blazer is $440 at Shopbop. Alice + Olivia Harris Leather Patch Blazer