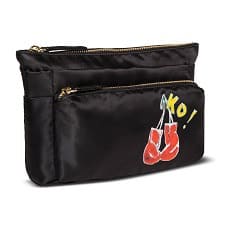 The designs on this bag may or may not be to your liking, but several readers called out this $16 cosmetic bag as being crucial to their organizational system within larger tote bags for work.  Nice! There are several bag organizers on the market — do you guys have any favorites? I tend to use pouches to move from bag to bag as well. The pictured one is $15.99 at Target, but note that you can find several others (for closer to $30) at Amazon. Sonia Kashuk® Knock Out Beauty Completely Organized Bag