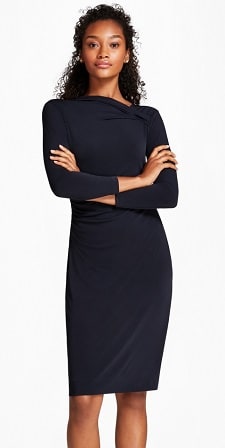 This fun, asymmetrical-neck dress is from Brooks Brothers. I like the navy, and I like that the dress has an interesting neckline that’s still work appropriate. It looks like an easy thing to just throw on and have your look made. It’s also machine washable. The dress is $148 and comes in sizes XS–XL. Asymmetrical-Neck Jersey Sheath Dress

A plus-size option is at Eloquii.

« Coffee Break: Avenue Tote
How to Care for Curly Hair in Winter »

« Coffee Break: Avenue Tote
How to Care for Curly Hair in Winter »
Back to Top