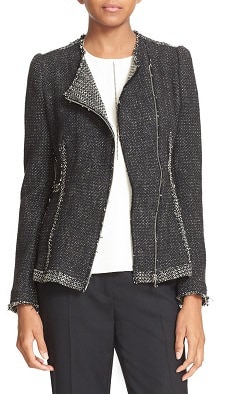 Happy Monday! I hope everyone had a great weekend. I love the nubby texture and exposed seams of this gray tweed jacket — it would look great with a pop of color in the mix (my thoughts go to bright yellow or cobalt blue, but a dark green or pink blush would also work). The blazer is $550 at Nordstrom. Rebecca Taylor Asymmetrical Zip Tweed Jacket

This tweed suiting set is more affordable and comes in regular, petite, and plus sizes.