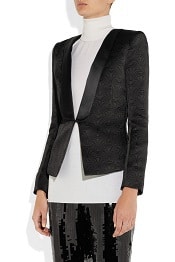 Net-a-Porter has a bunch of drool-worthy blazers right now, but the one that makes me most excited is this stunning satin tuxedo jacket from Balmain. The fan print is so art deco, the satin looks luxurious, and I love the structured, shrunken look — it’s the perfect thing to have in your wardrobe for years as your festive blazer. Now, I do take slight issue with the styling.  A) I hate white and black together in general.  B) I have too many memories of attending my father’s big office holiday parties as a young girl and thinking that the men who wore turtlenecks with blazers looked L-A-M-E — but that’s just my weird association with turtlenecks/holiday parties; there’s nothing actually wrong with them.  So I’d probably wear it over a simple dress — a red, a purple, even a nice dark green. The blazer is $2,910 at Net-a-Porter. Balmain Quilted Satin Tuxedo Jacket

« Weekend Open Thread
What Are Your Shopping Habits for Workwear? Moratoriums, Spreadsheets, and Crop Rotation »

« Weekend Open Thread
What Are Your Shopping Habits for Workwear? Moratoriums, Spreadsheets, and Crop Rotation »
Back to Top