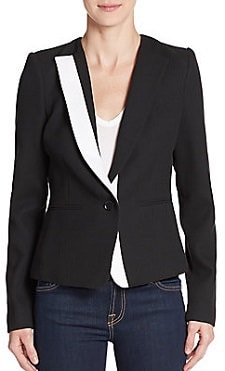 I spied this nice black and white blazer last week while looking for our Suit of the Week — while I ultimately found matching bottoms for the Elie Tahari blazer, , I have yet to find any matching pieces for this blazer.  Womp womp. But look how purty! I love the contrast stripe, the tailored fit, and — mais oui — the sale (budget blazers are hard to find!). It was $298, but is now marked to $119 at Off Fifth, sizes XS-L still left. BCBGMAXAZRIA Marcelle Jacket

Here’s a similar $65 blazer in plus sizes, and, interestingly, here’s a (kind of) similar fleece blazer in plus, petite, and regular sizes.

« Coffee Break: Scarf
Beauty Wednesday: 5 Multipurpose Makeup Items to Keep at Your Desk »
Back to Top