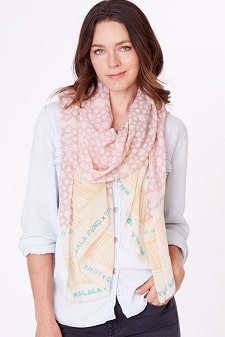 The soft, flattering colors of this scarf hide a bigger story: 100% of the net proceeds go to The Malala Fund, to benefit girls’ education. Each scarf has a printed quotation from Malala that reads, “One child, one teacher, one book and one pen can change the world.” Pretty! If you like the idea but not the scarf, you can contribute directly to the fund here. The scarf is $48 at TOMS; they estimate that net proceeds of $10-$15 per scarf will to go to the fund. Malala Fund x TOMS Scarf

« How to Get on a Board
Wednesday’s Workwear Report: Marcelle Jacket »

« How to Get on a Board
Wednesday’s Workwear Report: Marcelle Jacket »
Back to Top