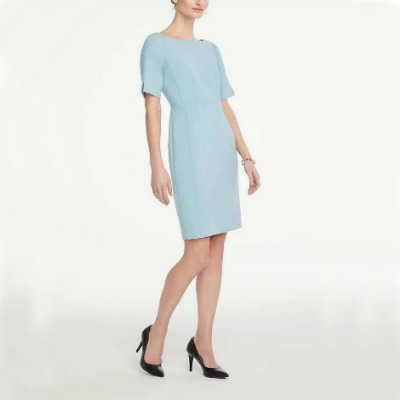 This boatneck dress at Ann Taylor Factory looks sleek and pretty and put-together. I like the little slits on the sleeves, and the wide boatneck, as well as the darts and seams going up and down the dress, which really give it a fitted shape. A dusty blue dress is not for everyone, and unfortunately this is the only color it’s available in, but I think it’s a nice, versatile option. I would wear it with anything you might wear with a light gray dress — black or navy or white or gray, as well as bolder colors if you like. It’s available in regular (0–16) and petite (00–14) sizes and is machine washable. The dress was $120 full price but is currently $72. Boatneck Sheath Dress

« Workwear Hall of Fame: ‘Minnie’ Travel Ballet Flat
The Hunt: The Best Dresses for Work »
Back to Top