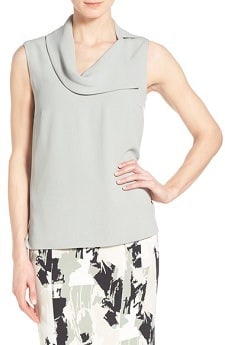 I think Boss has a hit with this asymmetrical cowl necked blouse — it’s interesting but elegant, and one of those pieces you can wear with everything, dressed up or down.  It used to be available in white, also, but right now it’s only left in matcha green (pictured), navy and black.  I like the loose fit, and the almost organic feel to the neckline.  This is the kind of top I like to wear with delicate round-shaped necklaces, like my Maya Brenner initial necklaces, but you do you.  The blouse is fully lined, and a mix of acetate/viscose; it’s available in sizes 2-14.  It’s $285. BOSS ‘Imieti’ Split Cowl Neck Blouse

Here’s are two similar sleeveless options in plus sizes (white/black and black/red); on the more casual, affordable side of things the top also reminds me of this hugely popular cardigan at ModCloth that comes in sizes XS-4X.