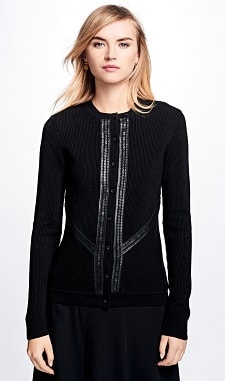 This merino and faux-leather sweater from Brooks Brothers looks like it will be great for fall — it feels edgy but patrician at the same time. (The matching shell is pretty cool too, although I think I prefer the pieces as separates.) The sweater is available in XS-L sizes for $398 at Brooks Brothers. Brooks Brothers Ribbed Merino Wool Cardigan

For a lower-priced alternative, try this or this. There doesn’t seem to be a close plus-size option, but here’s an open-front cardigan with faux leather and a “sweater jacket” with faux-leather trim.