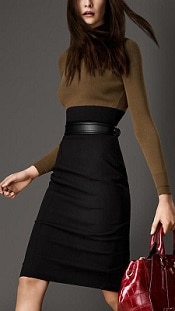 Lately I’ve been lusting after Burberry dresses, which seem pricey but unique. Take this color-blocked sweater dress — love the high waist, the mock turtleneck, and even the exposed zipper. Sadly, the belt is not included, but I love the look of it with the dress. It’s $1,095 at Burberry (sizes 0-14). Burberry Colour Block Fitted Jumper Dress

« Weekend Open Thread
The Best Workwear for Plus Sizes »