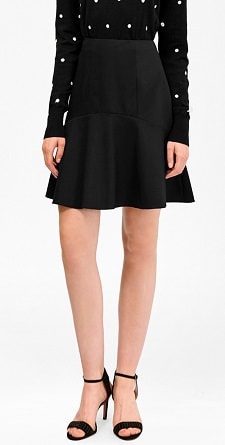 First of all, I should say that yes, as shown on the model, this skirt is too short for work. But I haven’t seen a flippy skirt like this from a younger brand like French Connection in a while, so this might be a great choice to add some dimension to your collection of skirts. I think you’d have to be a lot shorter than the model to wear this to the office, but I think most of us are — it says the model is 5’10”. It’s on a killer sale — the skirt was $148, then marked down to $59.99, and with promo code FSALBR it’s just $42. Chelsea Suiting Flared Skirt

« Suit of the Week: Ann Taylor
City Series: The Corporette® Guide to Los Angeles »
Back to Top