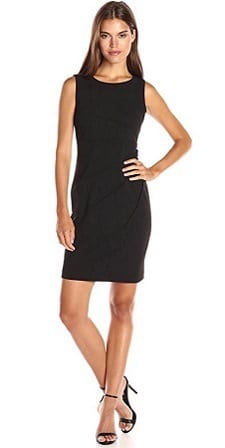 A black sheath dress is a must for any wardrobe, and this affordable one from Calvin Klein looks great — I always love a good starburst pattern because it adds interest without decreasing versatility.  It’s available on Amazon in sizes 2 through 16 for $89. The dress comes in purple in plus sizes at Amazon; Macy’s has a few more colors in both regular, plus, and petite sizes. Calvin Klein Women’s Starburst Sheath Dress

Psst: check out our recent roundup of sheath dresses for work, including our 5 Hall of Famers (all still available).

« Suit of the Week: Emerson Rose
Professional Women and Insomnia »

« Suit of the Week: Emerson Rose
Professional Women and Insomnia »
Back to Top