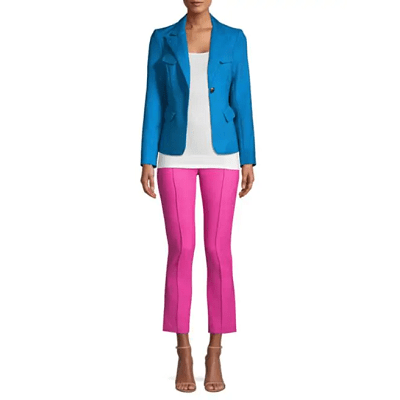 The blue color of this blazer is really lovely, and the cut looks super flattering. The pink pants it’s pictured with are maybe a bit much for a conservative office, but I don’t hate it! I would probably wear this with navy or gray pants or over a black sheath.

A plus-size blazer in a very similar shade of blue is from Gibson; it’s $98 at Nordstrom.

« Weekend Open Thread
Tips for Working Outside While Working from Home »

« Weekend Open Thread
Tips for Working Outside While Working from Home »

* If you'd like to avoid the moderation queue in the future, please make sure that the two two fields (User Name & Email Address) are filled out, and the checkbox is checked. BOTH can be fake/anonymous but e-mail must be formatted correctly. We're testing a "reporting" system for comments but not everything can be reported. Please reply to the questionable comment with the phrase "PLITK"; your comment will go to the moderation queue and we'll review the thread as soon as we can. THANK YOU FOR READING!!! Back to Top