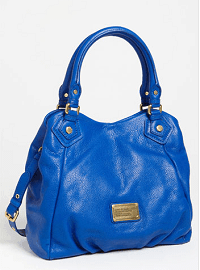 As someone who loves cobalt, I’m really psyched that that color — and other deep jewel tones — are apparently really in for fall. To wit: This gorgeous Marc by Marc Jacobs shopper. It’s perfect: 7″ is a great strap drop length, the 13x11x4.5 dimensions are big enough to carry your stuff without knocking people over in the subway, and that color… man, that color. Le sigh. It’s (gulp) $448 at Nordstrom (also available in black, white, tan, and dark green, as well as peach and brown). MARC BY MARC JACOBS ‘Classic Q – Fran Small’ Shopper