OK. Pink patent heels can be a bit much, even for me — but do you see the heels on these, ladies? Love the striped, stacked heels so much that I’d find a way to make pink work. They would be lovely with otherwise sedate colors — gray, navy, black, possibly even brown — and just think of the fun you’d have pairing these shoes with something like a simple black sheath dress. The shoe comes in two other colors, as well: a linen patent (with black and white stripes), as well as a navy patent (with navy and cream stripes). Love love love. It’s $298 at Zappos Couture. Kate Spade New York – Karolina

2018 Update: These shoes are still around! They’re almost always available in neutral colors, but they also often come out in fun new colors almost every season. it’s available in narrow and wide sizes.  You can sometimes find them on sale (as low as $135) at 6pm or Amazon. 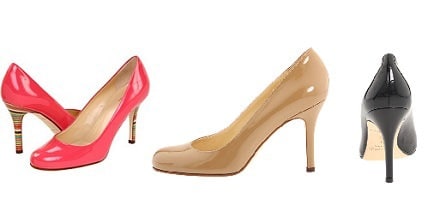