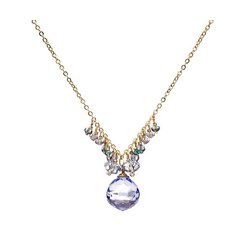 One of Target’s latest collaborators is jewelry designer Dana Kellin. Her regular line has prices ranging from $100-$600, but at Target they generally top out around $50. I like this pendant with multicolored beads — it looks like it’s a great way to jazz up a simple button-front blouse or sweater. It’s $49.99 at Target. Dana Kellin for Target® Multicolor Long Beaded Pendant Necklace (L-2)