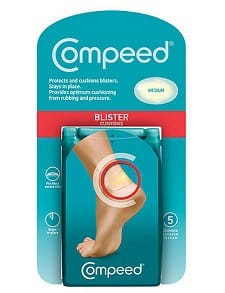 There’s always that rough period when the seasons change, and your feet have to get used to shoes you haven’t worn in months. In the summer it’s sandals, but in the winter I’ve had some boots and pumps take some serious bites. (And every time I’m like, how do I always forget to take it slow with new shoes?) I was intrigued to see that a product I’ve heard about for a while from friends in the UK is now available stateside: Compeed. Walgreens has the whole line for $9. Compeed Blister Cushions