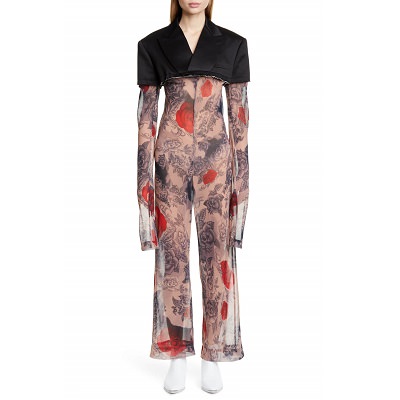 Whoa, how did it get to be April already? Jumpsuits have come a long way towards being acceptable for workwear — and this one even has part of a cotton blazer built right into it! (And hey, I always enjoy overly long sleeves.) Now, you may be asking: KAT, should I layer a white camisole or nude-for-me camisole under this? I’m usually on team “white camisole,” but I think here nude would be totally appropriate — some nice options include this, this, or this. The look is $1,680 at Nordstrom — but hurry; only lucky sizes are left. Cotton Blazer & Rose Tattoo Mesh Jumpsuit

Psst: Curious for more commentary from this day in the past? Check here.

« Weekend Open Thread
The Hunt: Shrugs for Work »
Back to Top