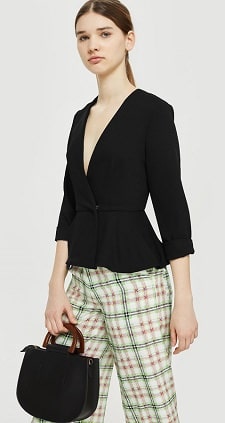 Topshop has a lot of cute, interesting things for the office right now, including this simple cross over peplum jacket. As pictured here, I’d wear it with lighter, spring-ier bottoms — and it might even be a great blazer to keep in your office for days where you need a little extra gravitas for your basic gray sheath dress. The neckline (as with Monday’s) can be tricky, but I’d go black here — if possible I’d find a t-shirt or blouse that mirrored the slope of the V, but a simple black scoopneck tank or a body-skimming turtleneck (or turtleneck bodysuit) might be great. The jacket is $75 at Topshop, available in sizes 0–14 (ooh, also available in a white — perfect for summer — or a daring bright yellow). Cross Over Peplum Jacket Two plus-size options are at Torrid (before you scoff, see Racked’s “The Evolution of Torrid”) and Kohl’s. This post contains affiliate links and Corporette® may earn commissions for purchases made through links in this post. For more details see here. Thank you so much for your support! Seen a great piece you’d like to recommend? Please e-mail [email protected]