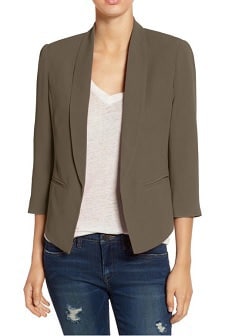 Our daily workwear reports suggest one piece of work-appropriate attire in a range of prices. This blazer is a bestseller at Nordstrom and has a lot of positive reviews. They only have it in three colors right now (the pictured olive plus black and navy) but it’s come in a ton of colors in the past. It’s got sort of a cropped, fitted look in the back with shorter sleeves, so it’s definitely more of a casual blazer. It’s hand wash cold, line dry, and is available in XS-L for $74. ‘Curve’ Open Front Shawl Collar Blazer Two plus-size options are here and here. Seen a great piece you’d like to recommend? Please e-mail [email protected] (L-all)

« Suit of the Week: Lafayette 148 New York
The Best Teas: What to Drink to Wake You Up, Calm You Down, and Maybe Even Replace Your Wine »

« Suit of the Week: Lafayette 148 New York
The Best Teas: What to Drink to Wake You Up, Calm You Down, and Maybe Even Replace Your Wine »
Back to Top