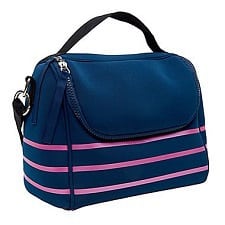 This cute lunch bag is easy to clean and has adjustable shoulder straps and a small handle at the top. Of course, I love the colors, considering they’re the blog colors, but I also like how this bag is sort of feminine but also sort of masculine at the same time. If you’re looking for a new lunch bag for yourself or for someone in your life (holiday gift?), this one is $25 at Staples. Cynthia Rowley, Navy Blue with Pink Stripes Lunch Bag