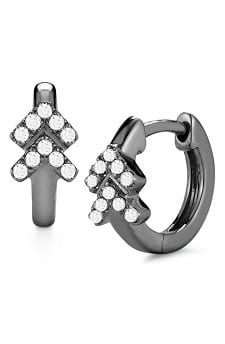 Yes, yes, I do love the huggie earrings and like to feature them, but these diamond hoops from Dana Rebecca Designs also seem kind of edgy and cool. I haven’t seen this black/hematite type of metal in a while, and I like the diamond arrows. Even better, they’re 40% off — they were $660 and are now $395. They’re also available in white gold at the sale price and rose gold and silver for full price. Pictured: Double Arrow Diamond Hoop Earrings