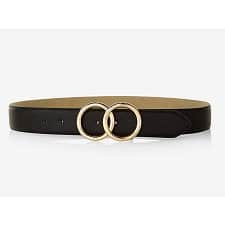 I was thinking about belts when we were talking about last week’s Suit of the Week — and how we don’t feature enough of them. Express has a bunch of cute ones right now, and this one is only $23, with 18 positive reviews. As the product page notes, you could wear this with jeans or to cinch an oversize shirt or dress — and you could also use it on top of a blazer or cardigan. Express also has a really cute triple O belt. I don’t think I can get behind some of the beaded belts they’re offering, but this looks like a slightly interesting style that’s cute, too. It’s currently on sale from $39 to $23. Double O-Ring Belt