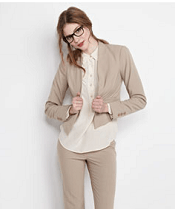 Last Call has a lot of Equipment silk blouses on sale — always a favorite of fashion magazine editors. Take, for example, this simple blouse in “fawn” (it’s also available in a dark green “clover“) — I like that you could wear it untucked or tucked, and the half-placket/pullover seems like an interesting update. The blouse was $229, but is now marked to $119, and with an additional 20% off it comes down to $95.20. Nice! Equipment Capri Silk Pullover Blouse, Fawn Seen a great piece you’d like to recommend? Please e-mail [email protected] (L-4)

« Suit of the Week: Veronica Beard
Business Casual — Without Being Overdressed »

« Suit of the Week: Veronica Beard
Business Casual — Without Being Overdressed »
Back to Top