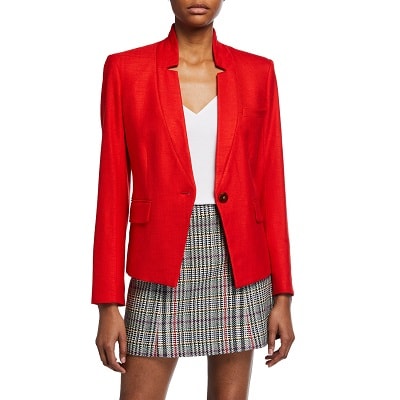 This red blazer adds a little holiday flair to an outfit without going full-on ugly Christmas sweater. The notch lapels and stand-up collar make it just a tiny bit more fun than your standard blazer, but still appropriate for even a conservative office. I would wear it with a gray sheath, black tights, and black booties. If you’re interested in creating a layered look without adding too much bulk, Veronica Beard sells dickeys that attach to the inside of the blazer. This white cashmere one would look cool with the red blazer and black trousers.

Halogen has a more affordable red blazer ($89 on sale) in both regular sizes and plus sizes.