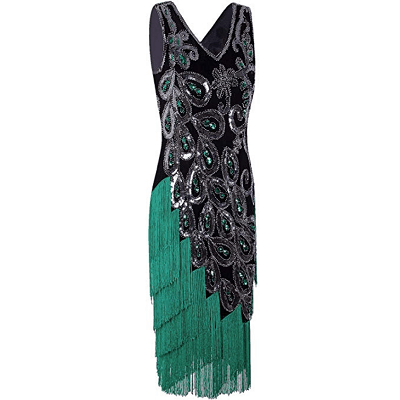 This Weekend Open Thread is a weird one, but stick with me. Someone in one of my Facebook groups was trying to decide between a similar dress from this seller and another one, so she posted a picture of herself in the dress — she looked amazing in it. So I clicked through and started browsing, and EVERYTHING from the seller looks amazing and crazy affordable. My favorite thing to do on Amazon clothing items is to look at the customer-submitted photographs, and this particular dress (pictured) has a TON of great photographs from happy customers, thrilled that they had a perfect dress to wear to a Roaring 20s-themed wedding or Gatsby-themed murder mystery party (which now I have to throw, THANKS); lots of people report getting a ton of compliments and feeling comfortable in the dress. With Halloween right around the corner, I had to post. The pictured dress is $38-$42, available in three colors in sizes S-XL, and eligible for Prime. (This seller, VIJIV, seems to have a ton of great dresses and flapper-garb, but I’m kind of amazed at the number of other Amazon sellers who also seem to specialize in this. Who knew?!) If anyone has any other suggestions for odd places to find niche clothes like this (flapper clothes on Amazon), please let us know.