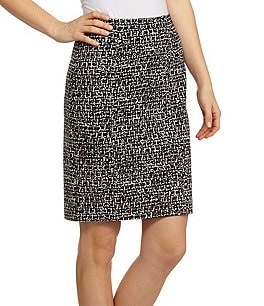 I am loving the black and white patterns that are everywhere this season. This pencil skirt from MICHAEL Michael Kors is great — I particularly like the way it’s a ponte knit but looks almost like a tweed from far away. It was $80, but is now marked to $47.70 at Dillards. MICHAEL Michael Kors Pencil Skirt

(Note that Nordstrom has the skirt in plus sizes