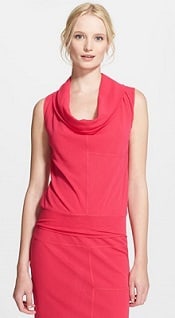 Nordstrom’s designer clearance sale has some sick sales, even in our price range for Wednesday TPS reports ($100-$150).  Lots of great basics in lucky sizes (love this Akris basic white tank in sizes 12-16, this Caroline Issa pencil skirt, this black Helmut Lang knit top in lots of sizes) — the one I’m featuring is this bright, happy cowl neck sweater from Jean Paul Gaultier.  I love the feather weight, the fact that it’s hand washable, and, of course, the color.  It was $325, but is now marked to $110. Gaultier Cowl Neck Tulle Tank

Here’s a more affordable option, and here’s a similar option in plus sizes.