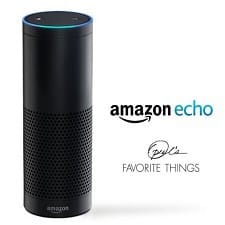 My brother and I have a history of gifting my mother robots.  TiVo and Roomba are the two that stand out, but I’m sure there have been others through the years.  This year, for her birthday (Dec. 2), we got her the Amazon Echo.  I’ve had one for a few months now, and as far as a review goes, I like it a lot.  I think of it as a cross between Siri (which I never use) and the ship computer on Star Trek — except the Echo has a pretty short range.  Still, I like being able to easily shout out, “Alexa, set timer!” after putting something in the oven, or listen to a podcast or music while doing dinner prep. I usually just link my iPhone to Echo via Bluetooth, but it’s also nice to rediscover Pandora. I mostly think of the Echo (and Alexa) as a fancy bluetooth speaker, but she can also tell you the weather forecast, the time, current sports scores, and a handful of other things — it’s definitely a work in progress. The Echo is $179 at Amazon.  Amazon Echo

(Random Q for you, ladies, techwise — does anyone have opinions on Roku vs. Amazon Fire? We’ve been considering one for a while and can’t decide between the two.)