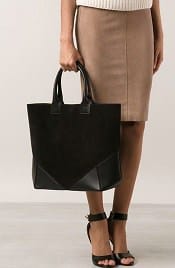 I always think of one of my favorite fashion movies, How to Steal a Million, whenever I hear or see anything Givenchy — Audrey Hepburn and Peter O’Toole are planning a big heist to steal a sculpture (“it’s valued at a MILLION DOLLARS!“) and O’Toole decides Hepburn should dress up as a member of the cleaning crew at the museum.  “What does this accomplish?” she asks grumpily.  “Well for one thing,” O’Toole deadpans, “It gives Givenchy the night off.”  Sigh.  It’s a marvelous movie, everyone should see it. (Oooh, and there’s free streaming with Amazon Prime!)  ANYHOO: I’m digging this “easy tote” from Givenchy, new to the sale section at Farfetch — it looks like a great, structured little tote for work; almost a more feminine version of a briefcase. It’s leather and suede, and on sale for $1,151 (was $1,645). Givenchy easy tote

Here are a few more affordable options if you’re on the hunt.