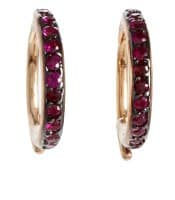 I always love me a good huggy earring, and this mini hoop from Ileana Makri looks like it fits the bill. I like the hinge back with the super teeny hoop (10mm), and I think the ruby color would look gorgeous against most, if not all, skin tones. The earrings are $1,050 at Barneys (also available in green tsavorite). Ileana Makri Ruby Mini Hoop Earrings