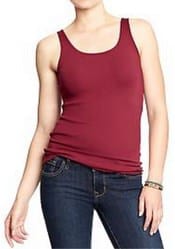 Maybe this is news to no one but me, but I’m intrigued by Old Navy’s “tami” — a camisole with thicker straps than a camisole, but thinner straps than a tank top. They sell it in 3-packs! TONS of colors! Petites, talls, plus sizes, and maternity versions! Fascinating. What do you guys think of the tami, and how does it rate compared to some of our other camisole favorites? Prices for the tami range from $5.99 (sale price) to $12.94. Old Navy Jersey Tami