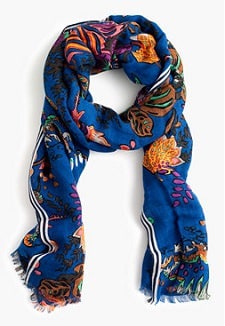 I looove the vivid colors of this scarf — it just seems so happy, and such an easy piece to throw on to liven up a neutral outfit, or to add more visual interest to another outfit like gray pinstriped pants. The scarf was $59.50, but is now marked to $39.99 at J.Crew. You can get an extra 40% off sale items right now with promo code SALESEARCH. J.Crew Tropical Floral Printed Scarf (L-2)

« 2016 Trends: What WON’T You Wear to Work?
Tuesday’s Workwear Report: Rhodes Blazer in Italian Wool »
Back to Top