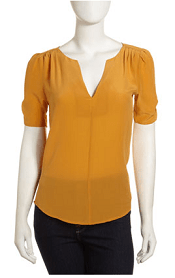 Ooooh: lovely.  I think this relaxed “golden amber” silk top is quite nice — I like the split V neckline, the pleating at the shoulders,and the slightly gathered sleeves. It does look a bit sheer, though — I’d probably wear a white camisole beneath it.  It was $188, then $99, but with the current “extra 40% off everything” sale at Last Call, it comes down to $59.40. Joie Amone Silk Blouse, Golden Amber