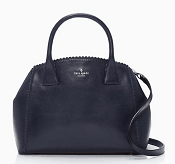 If any of you are hunting for a navy, lavender, or “pebble” bag, I have the bag for you: the Palm Springs Sloan. I like the scalloped trim, and the huge interior compartments — but I do think it looks much better when carried versus worn on the shoulders — but maybe that’s just me. The “midnight,” in particular, seems like a great bargain if you wear navy all the time — it was $458, but is now marked to $320 at Kate Spade and Bloomingdale’s. Kate Spade Palm Springs Sloan