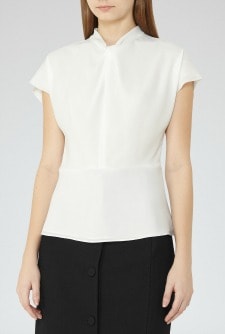 This top is really lovely — it looks classic but interesting, and I like that the zipper in the back isn’t too exposed. It seems like it’ll be easy to wear and flattering, and definitely appropriate for most conservative offices. It’s available in off white and in a lovely navy for $180 at Reiss in sizes 0-10. Knot-Front Top

Here’s a lower-priced option and an option for plus sizes.