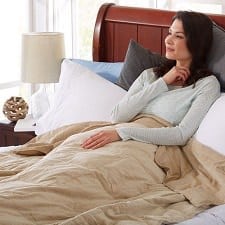 This may seem like a weird recommendation for summer, but recently I was tickled to see that Brookstone is now selling weighted blankets. Brookstone makes my favorite nap blankets that are great for gifts and are super soft — my favorite for Netflix binges! — and I recently became familiar with weighted blankets because I got one from my son when he was having major problems falling asleep. Do note, though, that there are different forms of insomnia — my insomnia of choice is the one where you wake up at 2 in the morning and go through anxiety loops, so a product like this (which helps you FALL asleep) is not terribly helpful for me — but if you have problems with delayed-onset insomnia and can’t fall asleep, or you generally are going through an anxious time, you may want to check out a weighted blanket. These range in price (according to size) from $133 to $281 (on a small sale right now), and they come in “blue wave,” tan, and navy blue. It’s really just like a hug — it’s very difficult to describe, but I can see how it could help anyone fall asleep. It’s a great drug-free way to help you sleep! Brookstone Weighted Blanket

(Note: There are very different appropriate weights for adults and kids, so make sure you pay attention to that if you’re ordering for a kid or for someone with a very small stature.)