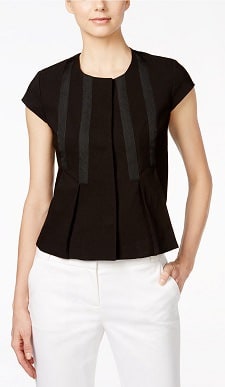 We’ve talked before about whether or not short-sleeve jackets are a yea or nay for work. I’m normally opposed to them, but this one could be a good look, depending on the rest of your outfit. The cap sleeves here make a big difference, and I like the round neck, the grosgrain ribbon detail, and the pleated but fitted look. I’d wear this with ankle pants, full trousers, or pencil skirts — there are a lot of options. In in-between weather, underneath it you could wear a very lightweight shirt with elbow-length or bracelet-length sleeves. It comes in sizes 2-12 at Nine West for $53 on sale. Nine West Lace Short-Sleeve Jacket

There don’t seem to be tons of options in plus sizes, but here’s one that’s part of a skirt suit from Tahari ASL.

« Suit of the Week: Stella McCartney
Sponsored: The Work Totes at “My Best Friend is a Bag” »

« Suit of the Week: Stella McCartney
Sponsored: The Work Totes at “My Best Friend is a Bag” »
Back to Top