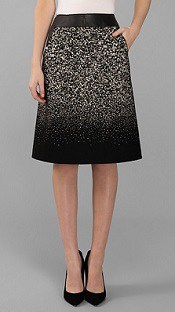 Happy Day-Back-from-Long-Weekend, ladies! I love the ombre, speckled look to this tweed skirt from Lafayette 148 New York. It has leather accents at the waistband and pockets, and, I think, is just a killer A-line skirt. I’m seeing it with a purple twinset, for some reason, but I think it would also be great with a black silk turtleneck (or, you know, pretty much anything).  It’s $498 at Bloomingdale’s. Lafayette 148 New York Bruna Tweed Skirt

« A Closer Look: Zappos’ Clearance Sale
What Not to Order at a Business Lunch »

« A Closer Look: Zappos’ Clearance Sale
What Not to Order at a Business Lunch »
Back to Top