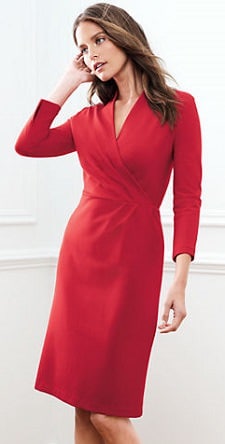 Even though we just featured this on CorporetteMoms, it’s worth a post here as well because this is a great dress — for $85 I think it’s going to be hard to do better than this. I love the sleeves, the flattering neckline, and the work-appropriate length. I’m probably more a fan of the black, but the pictured red is certainly very festive. It’s nice to see that it comes in sizes 2-18 in regular, petite, and tall — and it’s machine washable. 3/4 Sleeve Knit Surplice Dress

Here’s a very similar plus-size dress (but not the exact one) from Lands’ End — it comes in red and black as well as a deep pine, and (yay!) it has pockets.

« Suit of the Week: Banana Republic
The Best Spotify Playlists to Help You Focus »

« Suit of the Week: Banana Republic
The Best Spotify Playlists to Help You Focus »
Back to Top