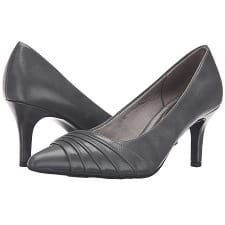 I was shopping somewhere recently (DSW?) and saw this pump in real life and thought it looked like a nice basic if you’re on the hunt. I’ve pictured it here in a gray, but it also comes in a wine and a black. And, bonus: it’s only $42. It’s available in medium and wide widths, sizes 5-11, at Zappos.  LifeStride Stacy Pump