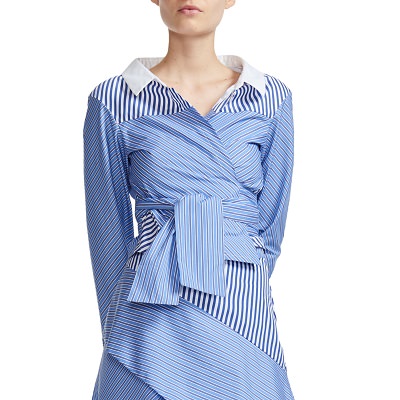 I know we’ve featured shirts like this in the past — sort of wackadoodle, crazy takes on very classic, conservative looks that are ultimately rooted in menswear. Sometimes it works; sometimes it doesn’t. Personally, I do like this one, which is from Maje — it’s obviously not for the banker at the super-conservative office, but it’s worth considering if you’re the kind of woman who has a lot of fun with your clothes and has a witty approach to fashion. It would look great with a basic black or gray pencil skirt, and it’s definitely a fun, interesting take on a classic. It’s $295 at Nordstrom and available in sizes 1–3 (equivalent to 2–8). Lim Mix Stripe Wrap Style Cotton Blouse

For lower-priced alternatives, try this Bardot top or this Lafayette 148 New York top, both on sale (lucky sizes only, unfortunately), and for a plus-size option, try this one from Seven7 Jeans.