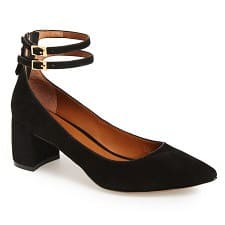 This shoe reminds me of the Valentino Tango pump that’s everywhere right now. I believe Linea Paolo was a reader favorite years ago, and they kind of disappeared and now they’re back, which is exciting. These are very reasonably priced, only $140, and they come in sizes 4-13, which is a pretty broad range. We’re picturing the black suede, and the other choices are black patent leather and a lovely bronze leather which may be a good nude-for-you shoe, depending on your skin color. Linea Paolo ‘Noel’ Pointy Toe Ankle Strap Pump