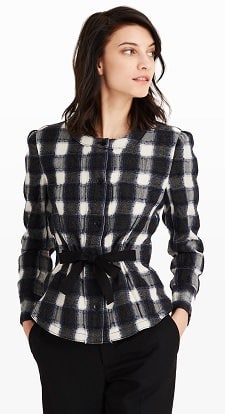 I love the structure of this very interesting plaid blazer — the cinched waist and the unusually plain round collar — and I can’t remember seeing a plaid blazer with this very feminine shape before. Normally the bow detail would be a lot for many women, or the plaid would be a lot for a blazer, but I think the combination works well for work. It’s an unusual piece in that it’s got the gravitas that you want at work with a sort of playful and fun feel. It’s $279 at Club Monaco in sizes XS-L. Ramha Jacket

Here’s a lower-priced option and a plus-size alternative.