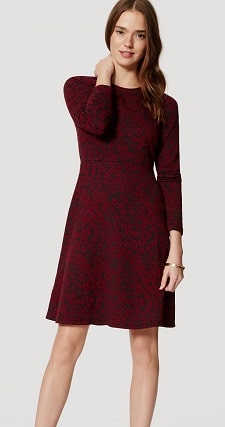 This is a very well-reviewed dress at Loft. I like how it has a high neckline (like yesterday morning’s dress) as well as sleeves, and it’s in a machine-washable cotton blend. The reviewers really seem to love the fabric of the dress and also the way that they can wear it from desk to dinner — or at this time of year, to office holiday parties. It’s available in regular sizes 00-16 and petite sizes 00-12, and you can get 40% off (no code needed), which brings the price down to $53. Crimson Floral Jacquard Dress

Psst: While you’re there, check out this skirt — it’s a bit on the busy side but I really like it.