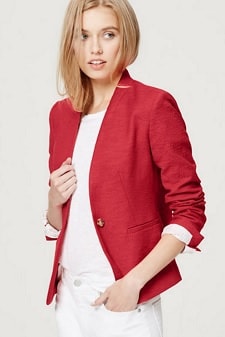 Our daily workwear reports suggest one piece of work-appropriate attire in a range of prices. Loft has a number of cute things right now, including this simple collarless blazer in red, white, and navy. (I’m also eyeing this fringe tweed blazer, and for more casual days, this floral dress.) I just read somewhere about how the collar is where you can tell the difference in quality in different jackets — so I suppose I’m not surprised to see more collarless blazers. But if you have to choose, look for collared blazers from fancier brands, and collarless blazers from more budget-friendly brands. At full price, this blazer is $98. Loft Textured Collarless Blazer Here’s a plus-size option. Seen a great piece you’d like to recommend? Please e-mail [email protected] (L-5)